When the series 1 e type Jaguar first came out like many other cars in this period Jaguar fitted the e type with crossply tyres. The e-type initially had 6.40H15 Dunlop RS5 tyres. These of course are only currently speed rated to 130mph.

Radial tyre technology was available when the e-type Jaguar was first made, and Jaguar offered radials as an option with the XKE. An e type could come with the Dunlop SP41, which is no longer made, & In period Jaguar said, "to fit the SP41 to your XKE you should have it restricted in speed".

The Tortoise and Hare - ⒸPIRELLI 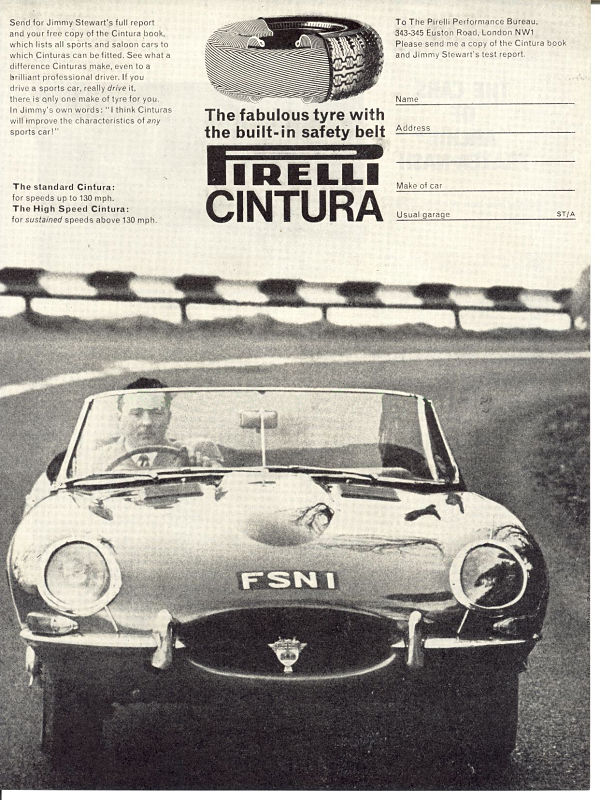 This is PIRELLI's period promotional film demonstrating the benefit of fitting the radial 185VR15 PIRELLI CINTURATO ™ tyre on an XKE Jaguar.

There is a massive amount of options available in the way of customisation for your jaguar XKE, there’s no right answer its all down to personal choice. There is however, one exception. The tires. Fitting more modern wider tires is never a better option for your XKE, even with regards to price. It doesn’t make for a better drive either. The steering, with these types of tires fitted, will become heavier, which can be fixed with powersteering. A more adverse camber would also assist in the attempt to stop the handling from allowing the car to suddenly disappear from you when leaning under cornering forces. This problem could also be assisted by lowering the car and stiffening the suspension however, this would make for a more uncomfortable ride which would make you feel every prominent bump in your path. Inner tubes should not be fitted in anything lower than a 70% profile tyre. All wire wheels should be fitted with an inner tube.

Companies like lynx and eagle do some excellent upgrades for XKE Jaguars, especially when it comes to the steering. These upgrades work to counteract the effects caused by the fatter tires fitted on these earlier models. These extremely well put together pieces of kit allow you to ask yourself the question, how do you want your XKE? Do you want to keep it as it was or would you prefer to get some upgrades and have a newer piece of machinery within the older body? This, of course, is all up to preference. When it comes to tires however, for your Jaguar Series 1 and 2 XKE the 185VR15 Cinturato CA67 is strongly recommended. For heavily modified early XKE and series 3 cars we would highly recommend the 205/70VR15 Cinturato CN12.